Transformers: Battlegrounds is a game published by a family-friendly interactive entertainment company known as Outright games and developed by Coatsink. There are also big names associated with this turn-based tactical game such as FMOD and made with the Unity game engine. Based on what we know so far, and the trailers, we are looking at a kid friendly game with basic features, an introduction to the realm of the tactical genre with a beloved franchise.

As a novice at tactical games, especially turn based where attacking and moving costs action points, Battlegrounds had a short learning curve and was simple to master. After starting on easy, I bumped up the difficulty to medium because I was doing well. There is also a hard difficulty if you prefer a challenge, but I was eager to watch the story play out. At any time the player can choose to go back and replay a mission and choose a higher difficulty, or bump it up for the next mission. There is an option to fast forward through the opponent’s turn, but the only sound you have from that is some garbled noise. It was better for me to let the action play out normally to enjoy the comments made by the NPC and the sound effects of the blasters. 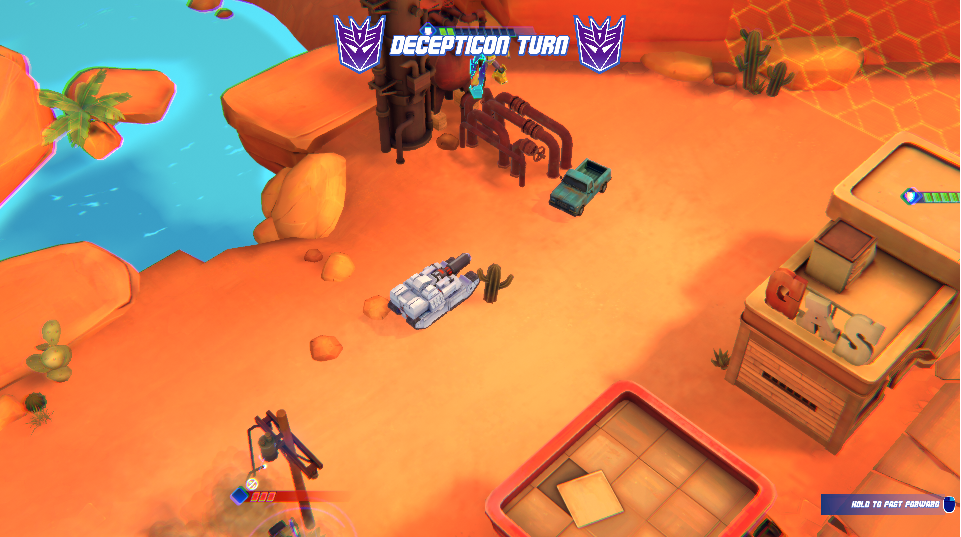 Autobots and Decepticons each have three action points, and most of my time was spent strategizing and figuring out how to use the action points wisely. On the Autobot side, some attacks can cause more damage or have more effects if more action points are spent on them. Each team also has an energon meter, and when half full an ultimate attack unique to each character can be used. Fill the meter to do more damage. Often when a character is about to deliver a fatal blow, the camera zooms in for a better view of the action. If only that could help improve the graphics. 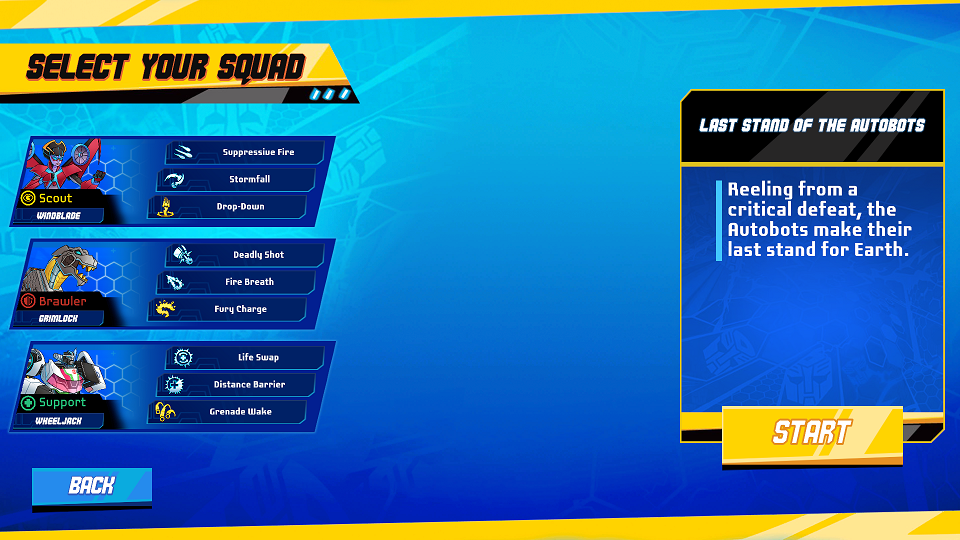 Battlegrounds is all about using those action points effectively to complete the mission. Each completed mission earns the player spark points which can be spent in Wheeljack’s lab to unlock new abilities that are unique to a specific role – Brawler, Scout, and Support – or unique to the individual character. My favorite team consisted of Grimlock, Windblade, and Wheeljack. Admittedly, one detail that kept drawing me back was how Grimlock waved his little arms to stand back up after he was knocked down. 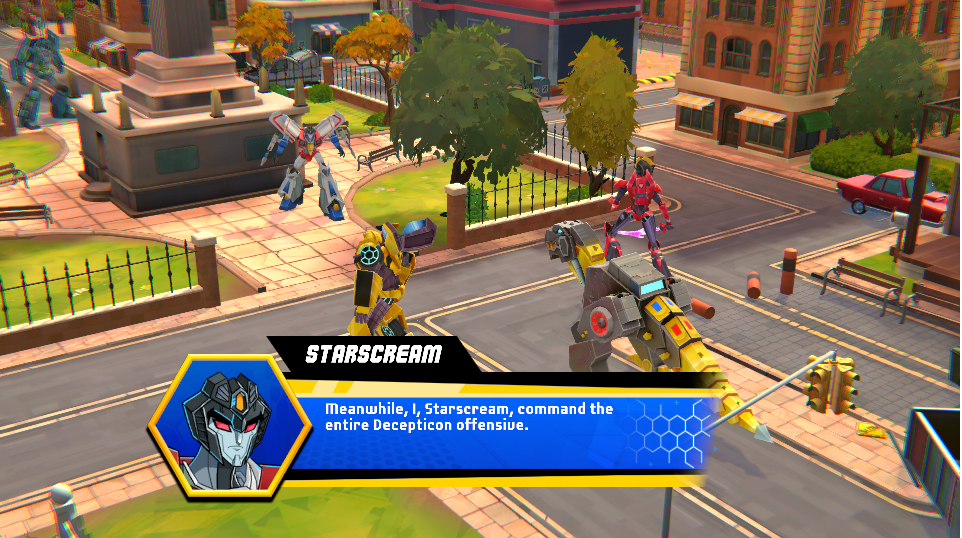 Some missions were about reaching a specific destination, in which the player will cross an entire area while battling back and dodging Decepticons along the way. At times, it was necessary to destroy rocks and create dust that provided cover or blinded the Decepticon. It was frustrating that at times it seemed like the character had a mind of its own on the path it wanted to take to reach a selected destination. Instead of taking the shortest distance, they seemed to go out of their way to go over a vehicle or vault over their own teammate. Also, any bot that can fly will be able to travel a further distance. 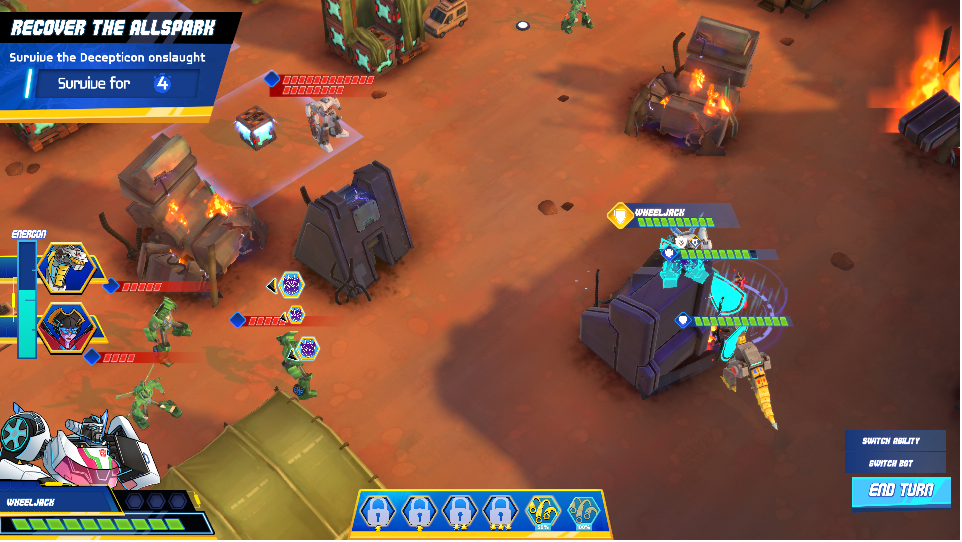 Other missions are about focusing on elimination, defeating all the Decepticons that are being thrown at you or taking out a big baddie, like Starscream or Soundwave, and all of their minions. There are quite a few familiar names so keep an eye out for them. Another type of mission that happens frequently is survival, where the player must survive the onslaught of Megatron and/or the Decepticons for a set amount of turns. The mission directive is in the top left corner, but if the player needs to reach a destination there will be an arrow to indicate the location the squad needs to reach.

Transformers: Battlegrounds is a game of decent length and content, with four acts and four or five missions per act.  In the event there is a need to restart a mission or go back to a checkpoint, there is no skip cutscene option. The most the player can do is left click through the text as quickly as possible. The story does well at presenting the need to press on, similar to watching a cartoon episode where you need to find out what happens next. Coupled with the simple game play, it quickly transformed into a game that was difficult to put down. Or, if I did, I was wanting to pick it up a short while later. 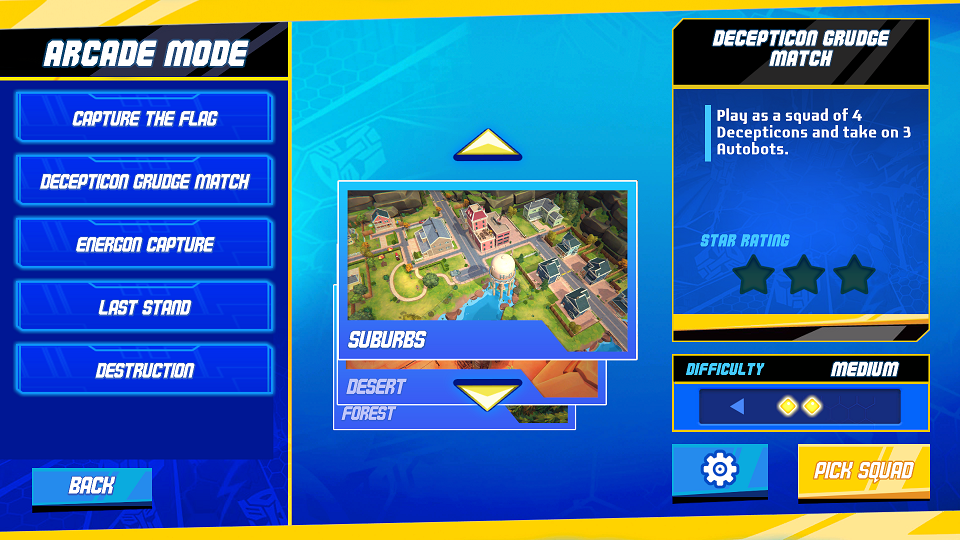 Story mode is great, but there are also other games featured in Arcade Mode, such as Capture the Flag where the player will need to grab the Decepticon flag and run back to the Autobot base three times. Energon capture to defend energon ore deposits. Last Stand is an endless mode. If like me you’re itching to dive in and take on the role of Decepticons, you will want Decepticon Grudge Match, where the player sets up a squad of 4 Decepticons to take on and wipe out the Autobots. Each of these unique Arcade Modes begin with one map, the Suburbs, and can only be played on Easy difficulty. As the player clears them and earns three stars, the next tier of difficulty is unlocked for that map and a new map is unlocked. Each unique game in Arcade Mode can also be played as cooperative two player, either through Steam remote play or local. With all the different modes there will be plenty to do. Except for Decepticon Grudge Match, these modes still essentially feel the same and don’t give much variety to the gameplay. 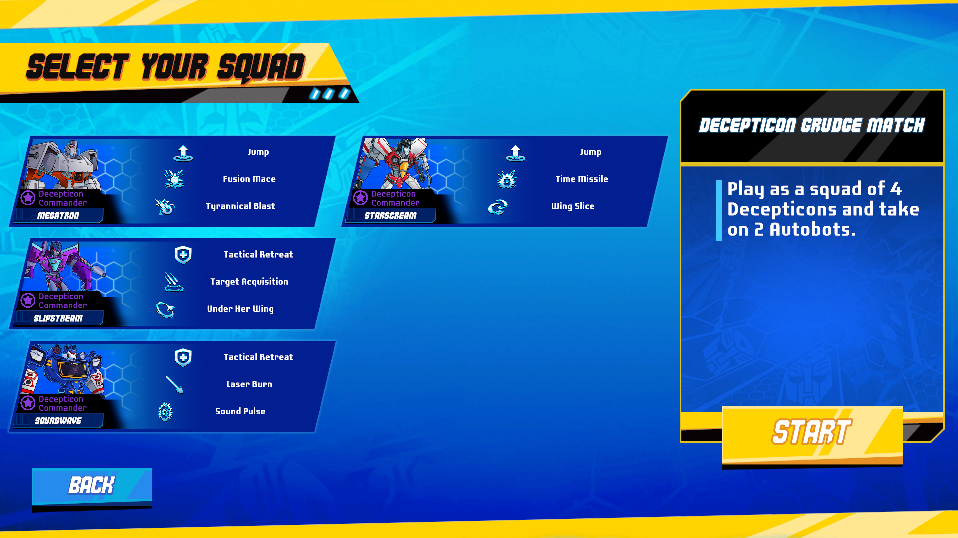 All the skepticism I held about Transformers: Battlegrounds being a glorified phone game were not entirely washed away. Perhaps, given the target audience for a game rated by the ESRB as E 10+, the graphics and style were all they were intended to be, but could easily be ported to a phone game. Currently, the game is $39.99 on Steam, and there are additions to the game which includes three Autobot skin packs, Cube Arcade mode, and a DLC was recently released. If you’re looking for a challenging tactical game with a bit of violence, look elsewhere. If you’re a fan of the franchise, especially the Cyberverse series, and you are interested in trying the tactical genre or have your child try it out, Battlegrounds is well worth it.

Available on Steam, Nintendo Switch, Xbox Series X|S and Xbox One, and PlayStation 4.