What about combat? In particular, how will PvP be affected or how will you account for folks being able to log out of the world? Will the body still be there to be looted or will it just disappear?

Ryan: We’ve actually had a lot of discussions on this subject but we have yet to nail down what we’ll be doing. There’s good and bad points for both methods.

Joe: Yeah, we haven’t focused on this subject too much as of yet, even though it’s a huge part of the combat/PvP system. We want to make sure that, whichever we go with, it will be functional and complete. We don’t want to say ‘It will be like this,’ and then not deliver. Transparency has been really important to us, and we’re not afraid to say we don’t know yet, but it will be a “thing” that will bear a lot of weight.

Ryan: I actually think this will be a big discussion we will have with our community once we get there. We’ll conduct polls, we’ll invite suggestions, and it will have a lot of influence on which direction we go. Whatever we end up doing, it will be whatever we feel works best for the game and for the players.

Scrub: Also, we can say that, given the “Integrity” system we’re going to implement, that adds another aspect to the game that most other games don’t have. We don’t know how much of an effect this will have, but it is definitely something that bears consideration.

Ryan: Yeah. Like from the player’s perspective, if your integrity is really low and you get raided and killed, that may have less an effect on the raider’s integrity or the NPCs behaviors than if your integrity is really high and you get raided. The local NPCs might not take too kindly to a local upstanding citizen being raided and immediately set out with torches and pitchforks to help avenge you.

What level of difficulty would you rate this (someone new to the genre okay to play or is it recommended someone be experienced in this genre)?

Joe: It’s not going to be an easy game where you can go in and not worry and there’s no real challenge because that’s not fun. If you play a survival-type game you want there to be a challenge. But a new player will be able to get what they need; scavenge weapons, ammo, supplies, build a base, and increase their in-game skills as well as their actual game-playing skills and get better. Then the game will progress to allow for more challenges, more areas to explore, more of the story opens up, all while the player gets better at playing, finds better equipment, and levels up. For those who want a hardcore serious challenge, they can pursue the “Low Integrity” option where they are constantly being hounded by the Infected, NPCs, and bounty-hunting players and see how they can fare.

Ryan: And that’s another thing about your character progression that Joe just mentioned. We’ve opted for a more real-time character development method rather than putting points into skills and whatnot. As your character shoots rifles more and more, your skills with those weapons will get better and better, less jamming, faster movement while aiming, faster reloading, and so on. Same thing with looting and crafting; the more you do it, the better you get at it.

Joe: And that’s what we wanted to do; to reflect some realism into the skills and character development. 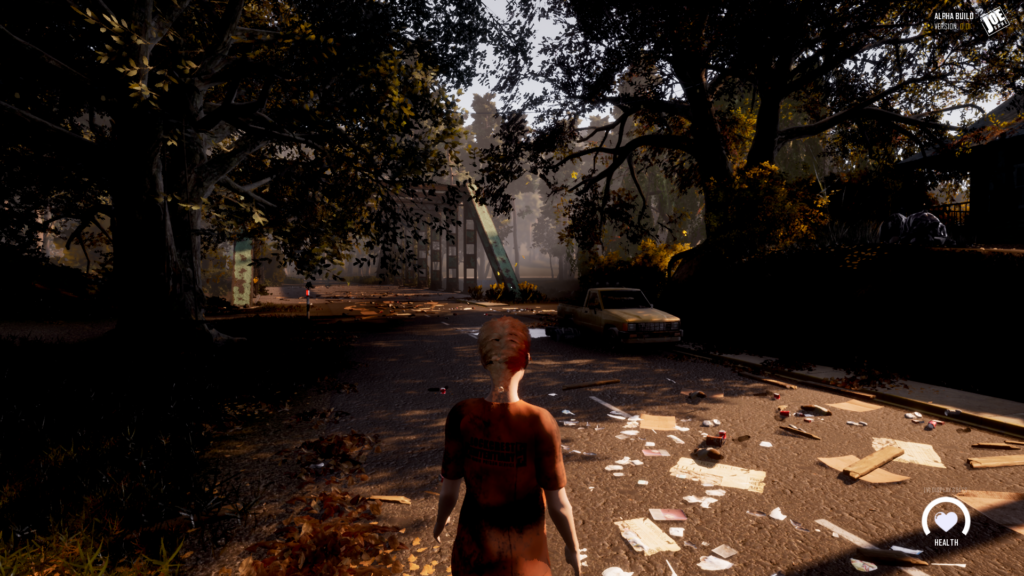 Since we’re talking about skills, can you go into some more detail on the skill progression?

Ryan: Sure. Take weapons for example; there’s like an umbrella-type skill called “Guns” which accounts and improves your overall understanding of all firearms. Then, beneath that, you have skills associated specifically with “Rifles” or “Pistols” that will increase your effectiveness with those firearms in particular. So if you consider what would be accurate in real life, if you shot a rifle all the time, your general understanding of “Guns” would improve, calibers, aiming positions, and things like that, but also you’d be very effective with clearing if your rifle jams, steadying your shots, and other skills. Now let’s say you, being a great shot with a rifle, found a pistol. You’d be less effective with that particular weapon, you’d have more problems clearing jams, your aim would be less precise, and you’d experience other problems unique to the pistol you weren’t used to. But the more you use that, your “Guns” skill would improve, but your knowledge and experience with the pistol would also improve. There are “umbrellas” like that for everything in the world, crafting, looting, and the like.

How would you describe the crafting and base building mechanics?

Scrub: Our crafting has gone through a few iterations and is still something we’re tuning and working on because we really want it to be an intuitive experience. We know it must be in the game, and it’s got to be really well done, but we don’t want it to interrupt the flow of the game by having to navigate through tons of menus and things. So trying to make the crafting system fluid is really important to us. At the moment we have it set up where you, say, want to craft something, you can do it in the background while you get on with whatever you want to do. So balancing that fluidity, yet retaining the depth of the system, is what we’re focusing on now.

Ryan: Exactly. So like right now the way we have it set up, say you have already crafted a basic bandage, you won’t have to go into the crafting tab and search for it again. The system will keep track of the last six or so items you’ve crafted and you’ll be able to just click on it and start crafting more straight away. This allows you to quickly do what you want and get back into the game. Or you can open your inventory, click on an item and see what it can make, and click on that to immediately start crafting it.

Follow up: And the crafting will level up according to skills and different areas, like First Aid, weapons, vehicle armor/parts, etc?

Ryan: Indeed. Crafting will sometimes be dependent on acquiring certain tools as well. For instance, you’ll need to find a rip saw in order to turn logs into timber planks. At the same time, certain craftables will only be available at certain levels. Like, you’ll need to be at an advanced crafting level in order to make your own lockpicks or advanced first aid kits.

How will recipes be learned?

Ryan: Sometimes you’ll automatically learn new recipes, like advanced bandages. Other times you’ll have to find magazine articles, like a gun magazine that describes how to build a suppressor for a pistol or rifle. Other recipes will be taught from NPCs.

Ryan: Yes, there will be requisite workstations needed in order to craft certain items. Also, rather than have to build a bunch of workstations, you’ll be able to craft your own workbench, then upgrade it to allow for more advanced crafting options. Like, you’ll be able to add a weapons upgrade to the workbench by bolting on things to the side of it. At that point you’ll be able to reload and case your own rounds for ammunition, craft firearm parts and upgrades that improve your guns, and other things, provided you are at the requisite level of crafting. There will also be other options that need to be set up outside your base, like a vehicle station, that allows you to build armor, weapon attachments, repair vehicles, and things like that.

So you’ll be able to find and use and customize vehicles with weapons and armor?

Ryan: Absolutely. We have a few customized concepts that we’ve developed for cars, SUVs, even boats and motorcycles.