Rogue Heroes: Ruins of Tasos is a roguelite dungeon crawler game with enough touches of other game elements to almost completely make the player forget which genre of game they are actually playing. Developed by Heliocentric Studios and published by Team17 Digital, Rogue Heroes is a game you did not know you needed in your life. Familiar assets, familiar concepts, with challenging puzzles and baddies, and, to top it all off, cooperative multiplayer local or online. This classic adventure game with procedurally generated dungeon rooms will be difficult to put down. Unfortunately, I had to or this review would have never been written.

As an over-the-top adventure game with RPG elements, the player will not encounter incredible 3D animated graphics. This is a classic game in every way, including the 2D design. The world is extensive, featuring deserts, forests, mountains, and swamps to traverse while working toward the completion of sidequests or focusing on the main mission of defeating those Titans. By defeating the Titans, the player will be saving the land of Tasos from destruction. This is a mission given by the four goddesses.

One Titan is located in each ruin, or dungeon, and each dungeon level is procedurally generated which means it is completely different each time you enter. Once a Titan is defeated a medallion will be placed at another ruin that is located north of Intori Town. At the time of this review, I have not completed Rogue Heroes: Ruins of Tasos and cannot truthfully tell you the purpose of this dungeon. However, based on experience, defeating the four Titans seems to be unlocking this ultimate dungeon and I hope there will be one more ultimate baddie. Or, it could be the temple of the goddesses.

There should be no expectation of clearing a dungeon and its boss on the first try. Rogue Heroes is a roguelite after all. During the exploration of the dungeon, the player will gather gems that can be spent back at Intori Town, or as a way to open a shortcut to the next floor in the dungeon. Use the gems to add more shops to the town that help upgrade the character, or build a farm to grow crops and sell for more gold coins.

If battling baddies in ruins and collecting gems to upgrade the character is not enough to keep the player busy, there are always additional classes such as Knight, Pirate, or Mage to master. The world is vast, more so than it seems in the beginning. Once the map starts to unfold it feels never ending, and that’s great! It’s a nice break from the sometimes tedious nature of the ruins, but there are still dangers and it is still possible to die. There are useful items to be found in the overworld, and side quests to complete for the villagers of Intori Town and citizens of other places nearby.

Each location, and the dungeon, comes with its own ambiance, including music. Nothing overpowering, but some might prefer their own more exciting soundtracks. Weapons make a satisfying ching noise when a critical hit is delivered. The bosses are big and exciting, and need more than just repeatedly whacking it to be killed. A bit of mechanics to hit that weak spot is classic and adds a challenge. This applies to many of the regular monsters as well. Every creature comes with its own sound effects, even the birds and frogs scattered around the environment, and the rippling of water in a stream, to bring the game alive. 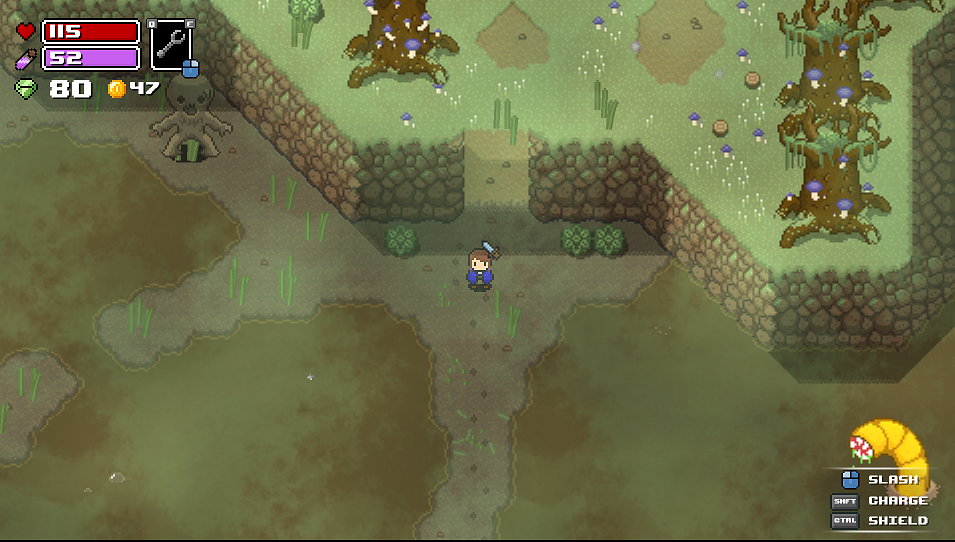 There does appear to be some fine tuning needed. Moving the mouse over clickable items in menus will not always highlight them, so sometimes it’s better to use the keyboard. Difficulties were experienced in online multiplayer. There was inconsistency in some of the puzzles where only player 1 could complete them and player 2 could do nothing in the room. Player 2 could throw a bomb at a cracked wall to break it, but the path was not opened for player 1. What is really nice about multiplayer is that I had not found an NPC yet that I was sent to locate as a sidequest, and upon finding the NPC in player 2’s game that counted for my single player game.

In Rogue Heroes: Ruins of Tasos, we have adventuring, puzzles, fights with bats, snakes popping out of jars, spiders, and skeletons, buying stats with gems to overcome the ever increasing difficulty of the ruins, questing, overworld exploration, and building a prosperous town with fishing and farming. Overall this game is a great balance of everything a gamer loves in adventure and roguelite games, and provides hours of fun to play alone or with friends.

Available on Steam and Nintendo Switch or through Team17 directly.