Skip to content
Speaking Simulator, the hilarious game about an android struggling to infiltrate human society, initiates its plan for world domination on Nintendo Switch™ January 30, launching simultaneously alongside the previously announced PC and Mac versions coming to Steam.
At the behest of an adorably malevolent but incredibly inept AI, venture forth into the human world as a robot built to live among them. Customize the android’s appearance, then utilize the latest in humanoid mouth technology to assimilate and ascend. How hard can talking to people be, anyway? Robots do not have social anxiety and existential dread…right?
Start off simple with first dates and job interviews, but as the android further ingrains itself into society, survive public speaking nightmares like wedding toasts and eulogies. Take too long between words or misplace the tongue and the robot will get nervous, causing its face to explode. Humans tend to find this suspicious. It’s hard to blend in when an android’s piston-powered tongue knocks out its teeth. 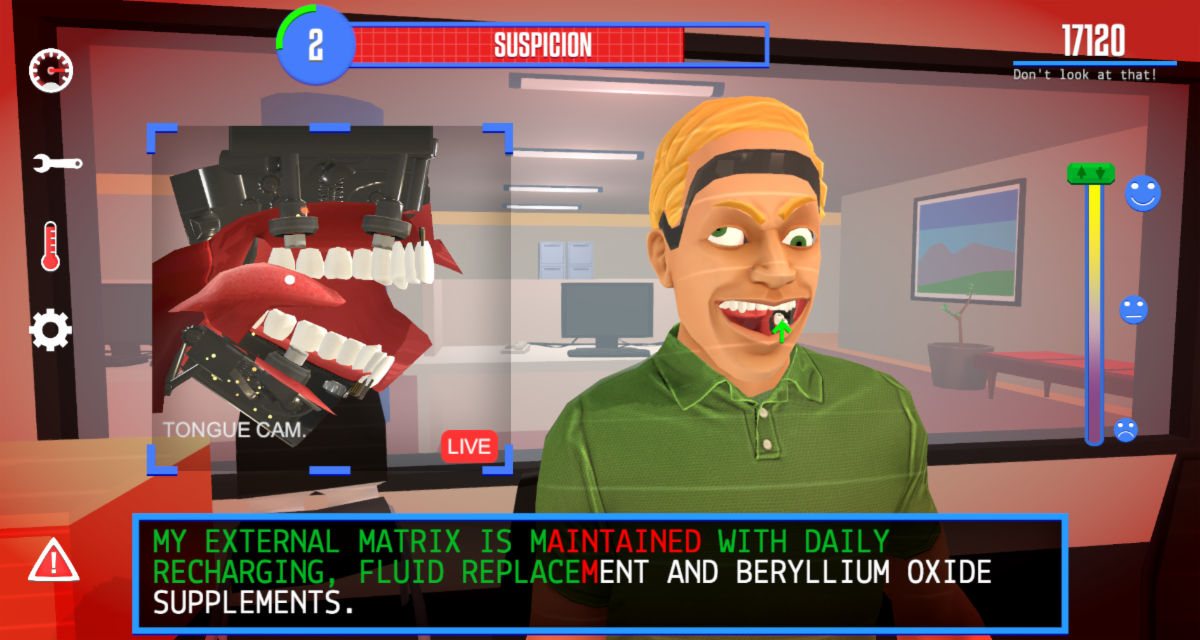 Simultaneously flail the tongue and maneuver lips with tricky controls to simulate human speech. Speaking Simulator utilizes the most realistic gibberish system in all of gaming, created with real linguistic theory. One hand controls tongue placement, requiring quick presses on red buttons inside the mouth. The other hand elongates or purses the lips to form words. PC players can use webcams to control the android’s mouth movements.
Chase a high score in each level by sounding like a natural speaker. Unlock new upgrades adding layers of difficulty and increasing the score threshold. Use Socio-Optic Dynamics to make just the right amount of eye contact and Expressive Facial Pistons for some good ol’ human eyebrow wiggling. When all that stress is too much, blow off steam at a club in Self Expression Mode, where humans and robots can dance the night away.
“Words are hard, and a lot of us who are unquestionably human take that for granted,” said Jed Dawson, co-founder at Affable Games. “When we started making Speaking Simulator we realized the concept of pushing words out of mouth-holes is actually incredibly funny and gross, and therefore ripe for a comedy game.”
Speaking Simulator will be available in English, French, Italian, German, Spanish, and Traditional and Simplified Chinese January 30 on Nintendo Switch and PC/Mac via Steam.
To learn more, please visit the game’s official site and Discord or follow the game on Twitter and Facebook.
Tags: comedy indie nintendo pc physics robots simulation steam switch